The Hemp Plant The hemp plant is a variety of the Cannabis Sativa plant species typically found in the Nothern Hemisphere. In herbal use since 2737 B.C., it contains naturally occurring cannabinoids and is one of the fastest growing plants. Both industrial hemp and marijuana come from the same cannabis species, but are genetically distinct. What are Cannabinoids? Cannabinoids are a group of chemical compounds present in both animals and in the plant Genus Cannabis, which includes both hemp and marijuana. At least 113 cannabinoids have been isolated from the cannabis plant. The two most widely recognizable cannabinoids are cannabidiol (CBD), which has a wide range of therapeutic applications, and THC, which is the psychoatcitve component found in cannabis and used in medical marijuana. Industrial hemp contains less than .3% THC and the sale of products derived from it is legal in all 50 states. How do Phytocannabinoids Work in the Body? All mammal have a biological and neurological system specifically tasked to receive and process nutritional cannabinoids (Endocannabinoid System or ECS). The ECS assists in maintaining the physiological, neurological and immunological systems of the body. If there is a deficiency of endocannabinoid production, the system's multiple receptors will utilize the addition of phytocannabinoids (cannabinoids which occur naturally in the cannabis plant) to help create a balance and provide support for relaxing, repairing or restoring. As reported by some pet owners, Phytocannabinoids have been known to help in bringing balance to pets suffering from a myriad of conditions. Full Spectrum Hemp OIl: In hemp oil, there are two main types of CBD formulas available today: full spectrum and isolate. Full spectrum hemp oil (aka PCR or Phytocannabinoid Rich) contains all cannabinoids; isolate hemp oil only contains CBD. Each of the 100+ cannabinoids present in the PCR have their own therapeutic benefits, and together research has proved they work synergistically to provide more benefit than any single unit (CBD Isolate) Calorie Content: (calculated) Metabolize Energy (ME) 6 Calories per Treat. All mammals have a biological and neurological system specifically tasked to receive and process nutritional cannabinoids. Active Ingredients: 4mg Phytocannabinoid Rich Hemp Oil per treat Inactive Ingredients: Chicken Meal, Whole Dried Peas, Tapioca, Chicken Fat (preserved with mixed tocopherols), Dried Blueberries, Natural Flavors, Dried Egg Product, Whole Dried Sweet Potatoes, Dried Cranberries, Dried Carrots, Dried Celery, Dried Beets, Dried Parsley, Dried Lettuce, Dried Watercress, Dried Spinach, Dried Aspergillus Oryzase Fermentation Products, Mixed Tocopherols and Rosemary Extract. *Source of Vitamins A,B1, B2, B5, B6, C, E, & K; antioxidants, anti-inflammatories, protein, calcium, choline, chromium, copper, dietary fiber, folate, iron, manganese, molybdenum, phosphorus, niacin, riboflavin, thiamine, potassium, zinc. Suggested Serving Per Day: 1 Treat for dogs under 20lbs.

(No reviews yet) Write a Review 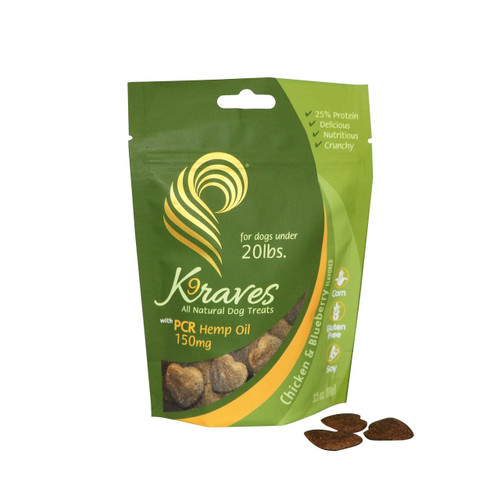